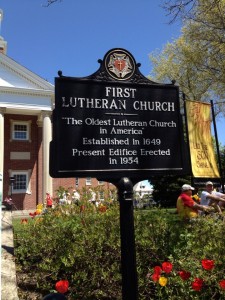 A Historical Summary of First Lutheran Church
Dating from 1649, ours is the oldest congregation of the Evangelical Lutheran Church in America (link opens in new window) , and the second oldest church in Albany. It is the only ELCA church which came out of the Dutch period of American history, and its services were originally held in the Dutch language. The center design of the church seal dates from the 18th century and depicts a swan, the old Dutch symbol for a Lutheran Church.

As the early years passed, Dutch gave way to High German as the language of our worship services, and this in turn was supplanted by English in 1808. There must be very few congregations which have worshipped in three different local languages in the course of their history.

Over the centuries, the congregation has worshipped at four different sites in Albany. The first church was built in 1670 at what is now the southwest corner of South Pearl and Howard Streets, then just inside the stockade. The second edifice of 1786 also stood at that site. Later, from 1816 to 1934, we had two successive church buildings at the northwest corner of Pine and Lodge Streets, also in the downtown business section. A sister congregation, the Lutheran Church of the Redeemer on South Lake Avenue, became consolidated with First Lutheran in 1926.

The present site at 181 Western Avenue has been in use since 1929, first with Friendship House on the State Street side of the property, and then our lovely colonial edifice with its unique historical windows was added in 1954, facing Western Avenue. The newer parking lot at the front of the church was added in 1979.

The domed Court of Appeals Hall on Eagle Street, which now houses the State’s highest court, was built shortly after 1834 adjacent to our Pine and Lodge property, on a parcel which the State purchased from the church that year for $5,000. Our congregation still has a perpetual right-of-way between the two courthouses for pedestrian access from Eagle Street down to the truncated Steuben Street. This was negotiated with the City in 1916, to give the congregation perpetual access to its then church site when the upper part of Steuben Street was closed off to other traffic.

Our sacramental silver-the baptismal bowl in use regularly, the communion vessels occasionally-dates from the 1820’s and the four pieces were all crafted locally. They are each engraved with the old name Ebenezer, by which the church was called in those days, although the name has been First Lutheran Church since 1871.

A 241-page book, Swan of Albany, was published by the congregation in 1976, describing and illustrating its more than three centuries of history. Ten years ago in 1989, a small supplement was published to update the book. Since then, Dr. William H. Rittberger retired in 1991 after a 26-year pastorate; The Rev. Robert W. Busch served as our pastor 1991-96; The Rev. Harry G. Souders, Ph.D. served as our interim pastor from 1997-99; and The Rev. Vernon A. Victorson retired in July 2011 after an 11 year pastorate.   Our current pastor, The Rev. Alison L. Leitzel, began serving First Lutheran in late August 2012.